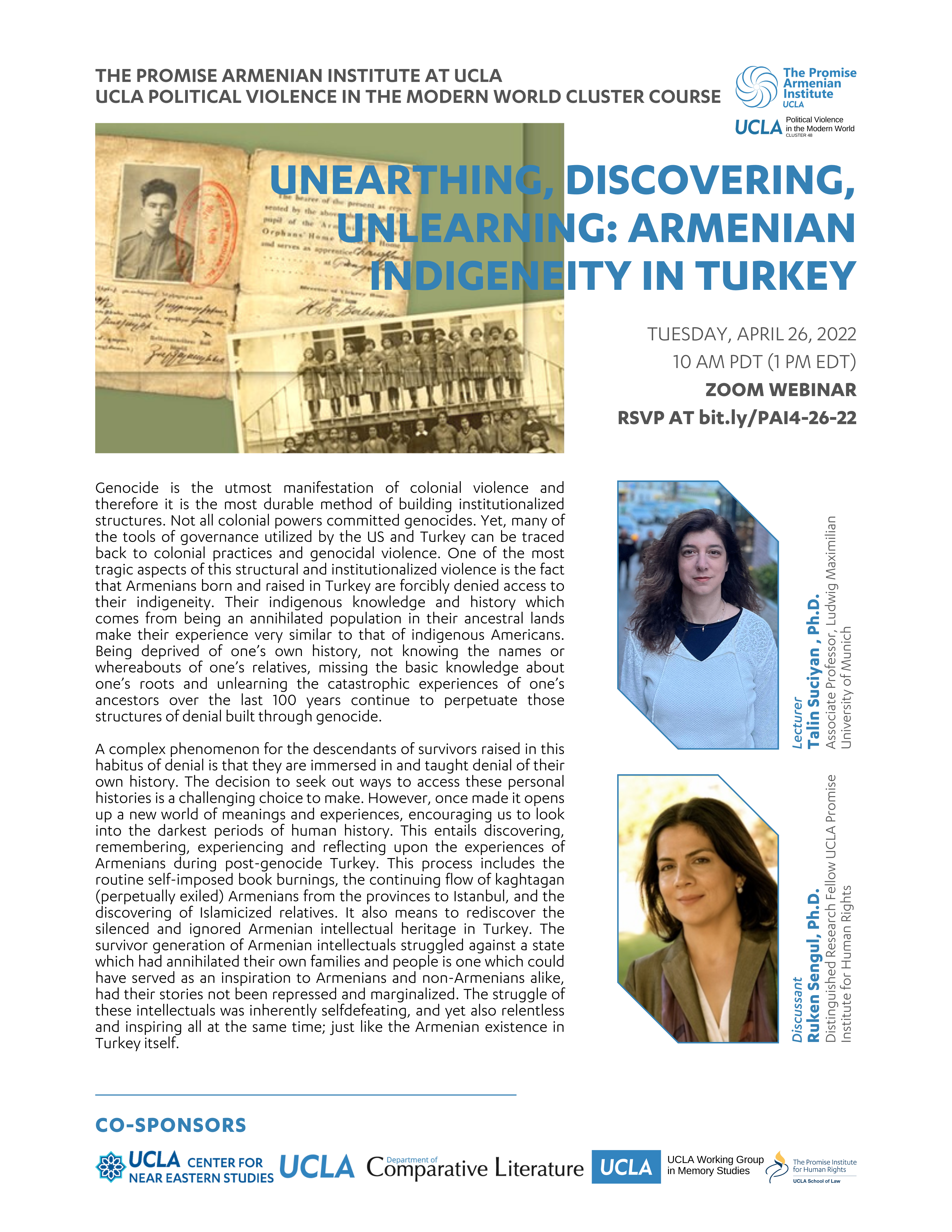 The Promise Armenian Institute at UCLA and the Political Violence in the Modern World cluster course present “Unearthing, Discovering, Unlearning: Armenian Indigeneity in Turkey” by professor Talin Suciyan of the Ludwig-Maximilian University of Munich. Ruken Sengul, Ph.D., will provide discussant commentary followed by Q&A. This lecture is co-sponsored by the UCLA Center for Near Eastern Studies, the UCLA Working Group in Memory Studies, the UCLA Department of Comparative Literature, and the Promise Institute for Human Rights at UCLA Law.

Talin Suciyan, is associate professor (Privat Dozent) of Turkish studies at Ludwig Maximilian University of Munich. She is the author of the The Armenians in Modern Turkey: Post-Genocide Society, History and Politics (2016). Co-winner of Der Mugrdechian Outstanding Book Award of Society for Armenian Studies in 2017, the book has been translated into Turkish and German. Suciyan’s second book project, titled “Either save us from this misery or order our death” (Ya derdimize derman ya katlimize ferman): Tanzimat of the Provinces, examines extensively the Archives of the Armenian Patriarchate of Constantinople in the mid-nineteenth century. It argues that the structural and institutional changes and their repercussions in the provinces throughout the Tanzimat were the precedents for the collective violence that followed.

Serap Ruken Sengul is a Distinguished Research Fellow at the Promise Institute for Human Rights at UCLA. She is an anthropologist whose work focuses on gender and sexual formations of sovereignty, nationalism, kinship, violence, memory and displacement in the Kurdish borderlands of Turkey, Iraq and Syria. Dr. Sengul earned her doctorate in Anthropology from the University of Texas at Austin, and was a Manoogian Simone Foundation Post-Doctoral Fellow in the Armenian Studies Program at the University of Michigan-Ann Arbor. She is a faculty-member of the cluster course Political Violence in the Modern World that co-sponsors this event.